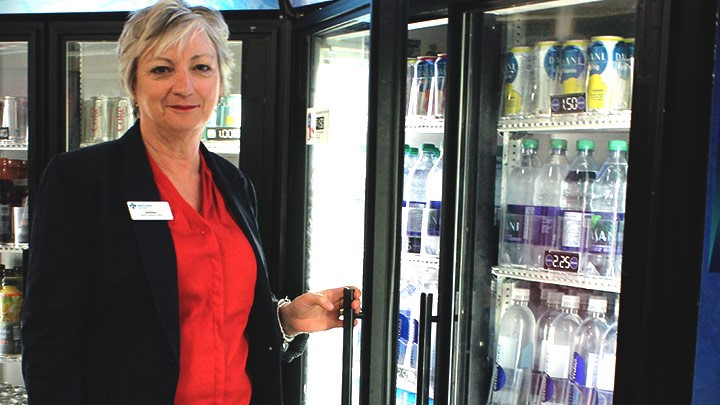 There’s nothing sweet about the effects of consuming too much sugar, says a Calgary doctor who decided to spearhead changes at the Rockyview General Hospital (RGH).

“We were selling beverages that exceeded the total daily recommended intake of added sugar,” says Dr. Sheila Watson, an obstetrics and gynecology physician at RGH. “I thought I should bend the ear of those in the know and say, ‘Hey, can we do better, can we support healthy choices, can we come in line with what the Heart and Stroke Foundation recommends?’”

When consumed in excess, sugary beverages including pop, sweetened coffee and teas, energy and sports drinks, flavoured water and milk will be responsible for an estimated 63,000 deaths and more than $50 billion in healthcare costs over the next 25 years, according to research conducted by the University of Waterloo.

RGH site leadership agreed with Watson and took action. In collaboration with Nutrition and Food Services (NFS) a plan was developed to remove all sugar-sweetened beverages from AHS-operated retail outlets at RGH.

After extensive consultation with a diverse cross-section of stakeholders, NFS improved access to healthier beverages starting in April. Surveys conducted among staff, physicians, patients and visitors showed that 92 per cent of respondents were supportive of the decision to sell healthier beverages at RGH.

More than 100 beverages were audited, with 22 cold beverages removed and 26 new products introduced. Nutritionally-void beverages sweetened with added sugar, corn syrup or other caloric sweeteners were replaced with healthier options, including water, milk and soy beverages.

In the roughly three months the program has been running, there has been no appreciable impact to beverage revenues at RGH. This is a clear indication to Porter that people understand and appreciate the efforts to offer healthy drink choices.

The early signs of success at RGH are promising. Porter’s hopeful all the research and groundwork his team has done will make it easier for other sites in the province to implement similar sugar-sweetened-beverage-removal programs.

“Provincially, we’re talking as a retail program about putting a package together that outlines the process step-by-step,” says Porter. “We want to share as much as possible with other sites about the successes and transition at Rockyview.”